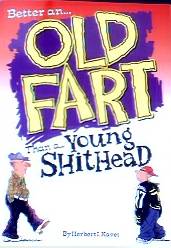 "Better an Old Fart Than a Young Shithead"

written by Herbert I. Kavet

First, this book is clearly patriarchial. It overtly references the male gender exclusively (as if women can't be Farts or Shitheads), flaunting masculinity in everything from toilet humor to the illustrations.

Second, it is easy to get tricked by the self-effacing tone here. One of the author's strongest tactics is self-deprecating humor, poking fun of the Old Fart even as he extols his virtues. This is just a tactic to get us to develop sympathy for and identification with the feelings of the Old Fart. A clever reader sees through this immediately, and begins to assign meeting to the seemingly harmless or endearing properties of the Old Fart. The picture that emerges from this meaning usually swamps any value to the properties to which we are sympathetic, typically exposing them as sick perversions, unexplainable behavioral aberrations, or (at best) neutral impact attributes. A reader who drills into this self-effacing humor will discover the darkest side of the Old Fart.

BAOFTAYS presents the following arguments, summarized then refuted below:

I can't believe the author is insane enough to even try to pretend that this is an argument for the Old Fart. What a dumbass.

Essentially BAOFTAYS argues that the Old Fart carefully makes the most of the precious little hair he has, while the Young Shithead "shaves his head or colors it purple and figures everyone else is admiring his elegant locks."

Mr. Kavet is clearly unfamiliar with the seething shithead subculture which exists among young professionals with boring short haircuts. Worthy of consideration also is the possibility that the author is among the jaded balding population who look suspiciously at any Young Shithead with a full head of hair, especially when it's being played with by a partner so gorgeous their ugly balding heads can only get as close to something like that as the crusty magazine they keep under their bed.

Hair is clearly an argument for the Young Shithead.

This is another example of an argument which belongs in the Young Shithead column.

The author basically contends that the Old Fart knows his alcohol limit, can afford expensive wine (even though he concedes that the Old Fart buys it to impress people and can't taste the difference). He further asserts that the Young Shithead wakes up with his head in the toilet. Totally irrelevant since it applies equally to both, but still pointed out, is the fact that they both love cheap beer which "makes him fart" -- yet another gratuitous toilet humor passage of which the author is disturbingly attached.

The Young Shithead rules the booze category as well.

I don't get why this one is an advantage for the Old Fart either. How can this possibly be? The author's brilliant insight is that Old Farts have a longer experiential fram e and therefore more to remember, but then he goes on to concede that they can't even remember it.

Of course, in typical fashion he accuses the Young Shithead of spouting off about stuff he doesn't know about. This is more of an ad hominem, which seems to be completely irrelevant to the issue of memory. I see no advantage for the Old Fart here. He can't remember anything, and even though the memory banks of the Young Shithead may have less in them, at least they can be accessed.

There is an easy rule of thumb to use with most of these, and it works especially well with memory -- if you instinctively categorize a criteria as being supporting evidence for the superiority of either Young Shithead or Old Fart, that's probably how it's best interpreted. In this case, you'd have to be pretty insane to do anything other than say memory is supporting evidence for preferring the Young Shithead

The author does a horrible job of trying to construct an argument for the Old Fart this time. Again invoking the classic sympathy pitch, the Old Fart does everything correctly to make sure his luggage is properly cared for, then still loses it. In my book this makes him a much bigger loser than the Young Shithead, who may have forgotten his overhead bag when changing planes, but at least knows where it is so it can be returned quickly and is lucky enough not to have his baggage lost (which does indeed seem to be a common problem confronting Old Farts). Also the Old Fart never really talks to anyone (especially people who could be selling stuff). The Young Shithead will indeed go toe to toe with anyone and is very talkative on flights, which frequently results in business connections, romantic liaisons, and much more pleasant flights. The Young Shithead will frequently tell people on planes to "load the bowl."

Old Farts sit next to you on planes and gradually make your area of the plane smell curiously like gaseous salami. If you are trying to work, they nosily look over at what you are doing. I have heard of one bright Young Shithead who realized an Old Fart was looking directly at his laptop screen to watch what he was doing, so he hastily made an extensive, animated powerpoint presentation graphically and objectively communicating the benefits to various illegal drugs simply to confound and disturb the Old Fart (apparently it worked nicely).

Old Farts also take forever getting on and off planes. They hold everyone up, making it irrelevant if a Young Shithead gets there 8 or 20 minutes before the flight as the author complains.

Also I have been on two flights where Old Farts had heart attacks. That really sucks. Enough said.

Where do you think this argument comes out?

The author really demonstrates his ignorance here. He basically says the Old Fart can use di-gel and avoid fried foods in order to avoid upsetting his digestive system. That's great except that he also eats shitloads of eggs, red meat and big gobs of butter and cream. Finally, in the ultimate irony, the author lists the supposed 5 food groups of the Young Shithead as:

And points out that the Young Shithead "will try to have a little of each every day." I think having a little of each of these every day is actually a pretty damn balanced diet. I would commend the choice as even being fully vegetarian compatible. The Young Shithead can eat this way if the portions are right and never have to worry about diet. The Old Fart just eats whatever hunk of fat or grease soaked thing happens to be slithering around on the plate.

The Young Shithead gets to eat what he wants and be healthy.

This amounts to a full fledged concession by the Old Fart, and it makes you wonder why the book is titled the way it is. This section admits the Old Fart hurts all the time and that the Young Shithead can do anything and heal almost instantly. Wait a second, which one is better?

In the same wayas #6, the author concedes that the Old Fart doesn't sleep well anymore at night but can grab plenty of sleep during the day, and simply points out that the Young Shithead will stay up all night and sleep during the day in the same way. At worst, the author is saying this is a draw, but it's more proper to view this one as a concession as well. At this point the reader will surely wonder who the real shithead really is.

The author shows just how much of an Old Fart he is by accusing the Young Shithead of sexual ineptitude. The Old Fart wouldn't say that if he saw the Young Shithead widening his wife and making her scream in satisfaction like he never did even as a Young Fart.

Old Farts are supposed to be experts at providing advice on things like "how to drive, drink, eat, and dress for all sorts of inclement weather as well having very definite views on marriage and children. The author also admits that those having to listen to this advice are "unfortunate," though he issues a thinly veiled caution to those who don't follow the advice -- those unfortunate Young Shitheads will be forced to listed to the "I you so's" when "he (yet another of the numerous patriarchial fixations) doesn't follow it."

Taking these a little bit out of order, I'll deal with the "definite views" first. It's clear that Old Farts don't know any more about women and marriage than Young Shitheads do. In fact, the Young Shithead is particularly lucky here because they can evaluate the Old Fart's life and actions from an unbiased perspective, rather than getting all the "definite views." Interestingly enough, the author does not even attempt an argument that the Old Fart's definite views are even defensible, much less plausible or cogent. Besides, the Young Shithead doesn't give a flying fuck about grandchildren and never will. Kids are stupid.

Next, let's quickly dispense with the how to's for inclement weather. If an Old Fart can only advise on what to do and what not to do during inclement weather, I say keep them in the closet until it rains. As if a Young Shithead doesn't know how to "drive, drink, eat and dress" just because it's not sunny outside. I say the Old Fart slows down to 20 mph on the freeway, drinks too much coffee and has to urinate every rest stop, eats garbage and then complains about indigestion, and is a fashion embarrassment. And that's rain or shine, baby. Finally all the Young Shithead has to do is leave skidmarks on the pavement, get totally shitfaced, eat acid, and wear beads in the rain.

Chalk another one up for the Young Shithead!

The Old Fart's underwear is dorky but he has lots of clean underwear all the time, where the Young Shithead wears underwear when he can find a tolerably clean pair on the floor. The author makes no attempt to indict free-balling, and there is persuasive evidence that this actually gives you greater sexual potency and stamina. Of course the Old Fart doesn't know this and keeps his tiny balls locked in vise-grip like underwear which he constantly scratches in public. Even if it's true that the Young Shithead keeps underwear on the floor from time to time (mixed in with about ten different women's thongs left behind), he wears clean underwear anytime he's going to get laid, which is a lot. The Old Fart isn't even in the Young Shithead's league when it comes to underwear.